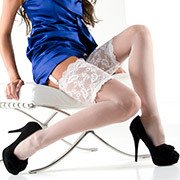 Launched on May 20th, 2000, Stockings HQ is now the world's biggest site for stockings enthusiasts and a leading retailer of hosiery from over 35 brands. The site was created to encourage a stockings renaissance and has grown from humble beginnings to a 7,000 sqft warehouse with 12 members of staff.

In early 2000 there were only really two kinds of stockings sites. The majority contained naughty pictures, while the rest were a group of specialist retailers who had been doing fine work in keeping the supply of stockings alive.

But, by the end of the last millennium the hosiery industry had seen many years of declining sales. Tights were becoming rare, and stockings rarer still. Alarm bells began to ring and we decided it was about time we did something about it. So, the idea for a new site emerged: a picture-free discussion and information resource that had, as its sole aim, the desire to see stockings back in the mainstream.

Since 1994 our company (Pure Fiction Media Ltd) had been running the Pure Fiction web site - a guide to writing bestselling novels. With a deft change in direction, Stockings HQ was launched as "the ultimate online hosiery resource" with 12 articles, a discussion forum, and lots of links to other sites - most of which were retailers or manufacturers. There wasn't a shop, or any revenue - we just did it to promote a cause! It was black, white and pink - and very basic but by the end of the year the site was achieving 2,000 page views per day.

In December 2000 it entered a short-lived purple and yellow phase before turning blue and pink on July 17th 2001.

The Stockings HQ shop opened on August 18th 2001 with a big box of Gio seconds (a result of developing the original Gio web site). They sold out within a fortnight, and then more brands arrived. Within a month we'd added Levante, Cette, Silky, Gipsy, Charnos and more. More suppliers arrived throughout 2002, and we took the message to the public with a series of press advertisements and high profile events such as the sponsorship of the School Disco night at the Hammersmith Palais in London.

Stockings HQ continued to grow, and in 2006 we acquired a second hosiery site. Called Silk Stockings, it slowly metamorphosed into Tights And More. TAM was relaunched under its new name at the end of 2007 and progressed well until a database disaster in early 2009 led to its merger with the main Stockings HQ site.

Stockings HQ was completely overhauled in 2011 with a striking new design and an all-new technical platform. The mission remains the same though: to create the ultimate Internet resource for all those captivated by stockings and the culture and lifestyle that surrounds them. Our aim is to encourage the revival by offering a vast range of fantastic products at the lowest possible price with fast delivery all over the world.