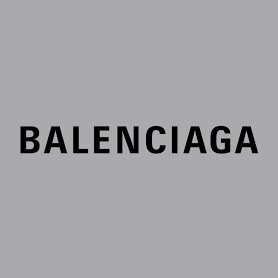 Balenciaga (/bəˌlɛnsiˈɑːɡə/ bə-LEN-see-AH-gə,[1] Spanish: [balenˈθjaɣa]) is a luxury fashion house founded in 1917 by Spanish designer Cristóbal Balenciaga in San Sebastian, Spain and currently based in Paris. Balenciaga had a reputation as a couturier of uncompromising standards and was referred to as "the master of us all" by Christian Dior.[2] His bubble skirts and odd, feminine, yet "modernistic" silhouettes became the trademarks of the house.[3] Balenciaga closed in 1972 and was reopened under new ownership in 1986. The brand is now owned by the French multinational holding company Kering.

Cristóbal Balenciaga opened his first boutique in San Sebastián, Spain, in 1917, and expanded to include branches in Madrid and Barcelona.[4] The Spanish royal family and the aristocracy wore his designs, but when the Spanish Civil War forced him to close his stores, Balenciaga moved to Paris.[4][5]

Balenciaga opened his Paris couture house on Avenue George V in August 1937, and his first fashion show featured designs heavily influenced by the Spanish Renaissance.[4] Balenciaga's success in Paris was nearly immediate. In the period of two years, the French press lauded him as a revolutionary, and his designs were highly sought-after.[4] Carmel Snow, the editor of Harper's Bazaar, was an early champion of his designs.[6]

Customers risked their safety to travel to Europe during World War II to see Balenciaga's clothing.[4] During this period, he was noted for his "square coat," with sleeves cut in a single piece with the yoke, and for his designs with black (or black and brown) lace over bright pink fabric.[4]

However, it was not until the post-war years that the full scale of the inventiveness of this highly original designer became evident. His lines became more linear and sleek, diverging from the hourglass shape popularized by Christian Dior's "New Look".[4] The fluidity of his silhouettes enabled him to manipulate the relationship between his clothing and women's bodies.[4] In 1951, he transformed the silhouette, broadening the shoulders and removing the waist. In 1955, he designed the tunic dress, which later developed into the chemise dress[4] of 1958. Other contributions in the postwar era included the spherical balloon jacket (1953), the high-waisted baby doll dress (1957), the cocoon coat (1957), the balloon skirt (1957), and the sack dress (1957).[4] In 1959, his work culminated in the Empire line, with high-waisted dresses and coats cut like kimono. His manipulation of the waist, in particular, contributed to "what is considered to be his most important contribution to the world of fashion: a new silhouette for women."[4]

In the 1960s, Balenciaga was an innovator in his use of fabrics: he tended toward heavy fabrics, intricate embroidery, and bold materials.[4] His trademarks included "collars that stood away from the collarbone to give a swanlike appearance" and shortened "bracelet" sleeves.[4] His often spare, sculptural creations—including funnel-shape gowns of stiff duchess satin worn to acclaim by clients such as Pauline de Rothschild, Bunny Mellon, Marella Agnelli, Hope Portocarrero, Gloria Guinness, and Mona von Bismarck—were considered masterworks of haute couture in the 1950s and 1960s. In 1960, he designed the wedding dress for Queen Fabiola of Belgium made of ivory duchess satin trimmed with white mink at the collar and the hips. Jackie Kennedy famously upset John F. Kennedy for buying Balenciaga's expensive creations while he was President because he feared that the American public might think the purchases too lavish. Her haute couture bills were eventually discreetly paid by her father-in-law, Joseph Kennedy.

In 1986, Jacques Bogart S.A. acquired the rights to Balenciaga, and opened a new ready-to-wear line, "Le Dix". The first collection was designed by Michel Goma in October 1987, who remained at the house for the next five years to mixed reviews. He was replaced in 1992 with Dutch designer Josephus Thimister who began the restoration of Balenciaga to high-fashion status.[citation needed] During Thimister's term, Nicolas Ghesquière would join as a license designer, and eventually was promoted to head designer in 1997.[7]

In 1992, House of Balenciaga designed the French team's clothes for the Summer Olympic Games in Barcelona.[citation needed]

Balenciaga is now owned by Kering, formerly known as PPR, and its womenswear and menswear was headed by Nicolas Ghesquière.[8] Ghesquière, like Balenciaga, is a self-taught designer, and apprenticed to Jean-Paul Gaultier and Agnes B. The fresh interpretation of Balenciaga classics, such as the semifitted jacket and the sack dress, caught the attention of the media as well as such celebrities as Madonna and Sinéad O'Connor.[7]

In 2002, Balenciaga's star, Nicolas Ghesquiere, imitated the work of Kaisik Wong, a designer from San Francisco. Ghesquiere created a patchwork vest in his spring collection that resembled one that Wong designed in 1973. Ghesquiere admitted in an interview in Paris that he had copied the garment.[9]

There was some conflict within the House of Balenciaga on Ghesquiere's designs, with the Gucci group saying that if Balenciaga didn't make any money in 2007 they would replace him.[citation needed] Ghesquière's F/W 2005 line showed that the house was not only making money, but also attracted a number of celebrity customers including editor-in-chief at Vogue, Anna Wintour.

The House of Balenciaga designed the dresses worn by Jennifer Connelly and Nicole Kidman to the 2006 Academy Awards, as well as the wedding gown Kidman wore when she married Keith Urban.[10] Kylie Minogue also wore a Balenciaga dress for her "Slow" and "Red Blooded Woman" music videos and for her concert tour.[11]

Today, the brand is best known for its line of motorcycle-inspired handbags, especially the "Lariat".[12] Balenciaga has eight exclusive boutiques in the United States. One Balenciaga store is located on 22nd St in New York City, New York. A second store is located in Los Angeles, California, on Melrose Avenue. Recently, a third store opened at the South Coast Plaza, in Costa Mesa, California. This store is 1,200 square feet (110 m2) and includes coffin-like inset displays. The New York and Los Angeles boutiques carry both men's and women's ready-to-wear, while the South Coast Plaza boutique carries only women's clothing. A fourth, located in Las Vegas inside Caesars Palace, carries only accessories. An additional location on the Las Vegas Strip, in Crystals at CityCenter, sells accessories as well as women's ready-to-wear. The boutique at Ala Moana Center in Honolulu, offers men's and women's ready-to-wear and accessories. There is a store at the Bal Harbour shops in Bal Harbour, Florida. An eighth store is opening spring 2014 in Dallas, [Texa, at the Highland Park Village to become the first boutique in Texas. The Highland Park Village boutique is opening next to Christian Dior and will carry men's and women's ready to wear and accessories. All of the boutiques employ spirited architecture, with white paneling, marble, and glass work as well as black leather seats and light green, black and navy carpets or white tiles, emphasizing the brand's lean toward avant-garde and the drama of fashion.[citation needed]

Balenciaga's Fall/Winter 2007 show impressed Teen Vogue editor-in-chief Amy Astley so much that an entire spread in the magazine, titled "Global Studies" and shot in Beijing, was influenced by it. The line included skinny jodhpurs, tight, fitted blazers, beaded embellished scarves, and other multicultural mixes.

Balenciaga is known for creating avant-garde structural pieces, straddling the edge of fashion and forecasting the future of women's ready-to-wear fashion. Vintage Balenciaga garments are popular among fashion editors, Hollywood stars, and models, and have been seen on Sienna Miller,[13] Lara Bingle, Raquel Zimmerman,[14] Caroline Trentini, Emmanuelle Alt,[15] Tatiana Sorokko,[16] Hilary Rhoda, Jennifer Garner, and Stephanie Seymour, among others.[17] Balenciaga is also frequently worn by actress Chloë Sevigny, who is also a muse of Nicolas Ghesquiere.

In November 2012, Balenciaga announced that it was parting with creative director Nicolas Ghesquière, ending his 15-year tenure.[19][20] The brand announced Alexander Wang its new creative director.[20][21] Wang presented his first collection for the label on 28 February 2013 at Paris Fashion Week. In 2014, the Tribunal de grande instance de Paris set a trial date for the lawsuit between Balenciaga vs. Ghesquière.[22] Kering-owned Balenciaga claimed that Ghesquière's comments in the magazine System had hurt the company's image.[23] The highly publicized suit was mediated out of court.

In July 2015, Balenciaga announced it was parting with creative director Alexander Wang after three years. The Spring/Summer 2016 show was his last, featuring white lounge wear made from soft, natural fabrics.[24] In early-October 2015, the brand announced Demna Gvasalia as its new creative director.[25]